First off,  we just want to thank everyone who gave us love for last week’s 20th Anniversary episode of the Bovine Ska.  It was a tough show to glue together so we are so happy that you all loved it so much.  Here’s to another twenty years!

The June 21st edition of The Bovine Ska and Rocksteady began with a seldom heard rocksteady cut from Lee Scratch Perry called, Run For Cover, which was released on Star in 1967.  We played that in tribute to the endlessly entertaining, live painting event that Scratch put on at Dem Passwords in Chinatown here in Los Angeles on Thursday, June 16, 2016.   We followed with seven more smooth rocksteady cuts including Dion Cameron and The Three Tops gem, Miserable Day, which they cut for WIRL in 1967.

Our weekly mento set began with Miss Goosie from Count Owen’s Rock Steady Calypso LP which came out on Federal in 1968 and ended with Lord Power’s wildly festive, Let’s Do It on Hi Lite in 1956.  We ended the first hour with a rousing set of ska, with our final track being Hortense Ellis disguised as Little Darling and No One, which she recorded for Prince Buster on Voice Of The People in 1965.  We then began our spotlight on Sir Mike The Musical Dragon Label…

From the early soundsystem era, we always hear about Lloyd Daley’s Matador, Duke Reid’s Trojan, Coxsone’s Downbeat, Prince Buster’s Voice of the People, and Vincent and George Edwards (collectively known as King Edwards) The Giant sound systems. Mike Shadeed’s Sir Mike the Musical Dragon Sound System stood in the company of these big names, but we often do not hear of Shadeed’s work.

Sir Mike the Musical Dragon was considered one of the big six sound systems in Jamaica, so much so that Shadeed was invited by the Jamaican government to partake in Independence celebrations and dances in the mid-60s. As a testament to the reputation and popularity of the Sir Mike sound system, King Tubby, in interviews, has even discussed the power of Sir Mike’s, saying that Sir Mike was even stronger than Coxsone Dodd’s Downbeat and Duke Reid’s The Trojan by the time the mid-60s arrived. Sir Mike the Musical Dragon also introduced the music world to Prince Far I, who was a DJ for the sound system before he became a recording artist.

As a record label, Sir Mike the Musical Dragon gave us some excellent ska from some of the best artists at the time. We kicked off this spotlight on the Sir Mike label with a duo of great talent, Stranger & Ken, Stranger Cole and Ken Boothe, who recorded, Hush Baby, for Mike Shadeed in 1963.

Before playing melodica in the 1970s, Joe White recorded primarily as a vocalist in the 1960s. For the Sir Mike the Musical Dragon label, White recorded two beautiful skas. Wanna Go Home, features a simple and gorgeous trumpet line from Baba Brooks playing in tandem with White’s solid voice, and “When You Are Wrong” also features Baba Brooks, but White’s voice shines in the track. We started off the second set of the spotlight with both of these wonderful Joe White recordings.

Here is the June 21st, 2016 Generoso and Lily’s Bovine Ska and Rocksteady:

Lily and Generoso with Keith and Tex from 2015

Twenty years ago this week, Generoso arrived to the basement of the Walker Memorial building at MIT and stepped into the studios of WMBR, 88.1FM Cambridge where he filled in for his friend Chris’ radio show, Spiddle, Urine, Phlegm, and Blood by playing two hours of a mix of original Jamaican and Two Tone Ska.  The program director at the time enjoyed his show and offered Generoso a slot on Tuesdays at midnight and the show remained at that time for the next nineteen years.  In 2010, Generoso met Lily and they began doing the show together ever since.  The show remained on the schedule at WMBR until 2015 when Generoso and Lily moved to Los Angeles where the show continues on Mixcloud.

Over the last twenty years The Bovine Ska and Rocksteady has played early Jamaican music from 1955-1975 ( we sometimes go much earlier than that but rarely later) concentrating on the earliest recorded musics in Jamaica, mento, rhythm and blues, ska, rocksteady, and early reggae.  We have also been fortunate to have some of the greatest recording artists in Jamaican music history visit the show from Jimmy Cliff  to Owen Gray,  Prince Buster, Roy and Yvonne, BB Seaton, Lynn Taitt, Eric Monty Morris,  Keith and Tex, Big Youth, Lord Tanamo and Laurel Aitken as well as modern performers like Dave Wakeling of The English Beat, Greg Lee from Hepcat and David Hillyard (who composed our opening theme) and Glen Pine from The Slackers.  This has been a blast these last two decades.

Over the last few weeks, Lily and Generoso have rummaged through the years via piles of old cassette tapes, DATs, CDs and MP3s to create this past week’s twentieth anniversary show,  Included are interviews from the aforementioned artists and live performances from the show, and even a set from the patron saint of The Bovine Ska, Magnus Johnstone, who passed away in 2013, as well as the rare recordings of tracks from the performers that you have come to expect over the last twenty years.

We have no intentions of stopping what we have been doing since 1996 and we would like to thank all of the listeners, artists, and WMBR for their support over the years.

So, celebrate with us by listening to our 20th Anniversary Special: 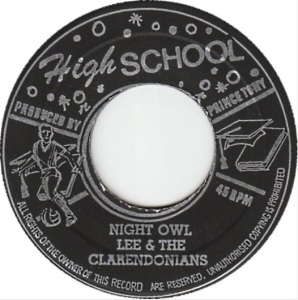 The Clarendonians On The High School Label

As the Bovine Ska veered towards its 20th Anniversary on June 14th, 2016, we decided to stay the course and do a traditional show (traditional for us) that you have heard these last twenty years.  Our spotlight, which occurs midway through the show as always, was on Prince Tony’s reggaerific HIGH SCHOOL LABEL!

The show began with two sets of superb rare ska beginning with a Maytals cut which has never before been played on The Bovine Ska, a gem from Toots from Rolando and Powie in 1963 entitled, Make Me Do.  We are still celebrating Toots’ return to the stage this summer after a three year absence.  Do check him out when he comes to your town!  Starting our mento set was Harold Richardson and The Ticklers’ cover of  Don’t Fence Her In on MRS in 1952 and we ended our first hour with a long set of rare rocksteady included a version to version on Studio One of Alton Ellis’ Mad Mad Mad.  After that set we started on our thirty minute spotlight on Prince Tony’s High School Label.

Prince Tony is the king of the deejays and the version, so this spotlight on the High School label had plenty of both! Known as Prince Tony as a producer, Tony Robinson began his production career in reggae. Many of his productions would make their way over to England, where plenty of his artists would see success. Though the High School label releases did get decent distribution through Trojan and Pama subsidiaries, Prince Tony’s production legacy is often tied to The Gladiators’ LPs Trenchtown Mix Up and Proverbial Reggae and Big Youth’s LP Dreadlocks Dread, so we are excited to show the brilliance of his earlier productions for the High School label. This spotlight has many major names in it, and we were excited to kick it off with one of the biggest deejays out there, Dennis Al Capone, here known as Young Al Capone and his recording “Girl Called Clover” and its version.

One of the deejays that spent a lot of time at High School was Winston Scotland. Believed to be the brother in law of U-Roy, another fine deejay and an artist who also stopped by the High School label, Scotland got his start toasting over the selections at the Sound of Muzik and the Soul King sound systems. As a recording artist, Scotland worked with Joe Gibbs and Phillip Monroe before heading over to the High School label. At High School, Scotland recorded some of his best tracks, including “Buttercup,” which Prince Tony had great ambitions for with his licensing of the track over to the Philips label in the UK for major distribution.

For our disco background for the first hour this week was The Tee Cee’s 1978 LP on AVI, Disco Love Bit and for the second hour, Barbara Mason’s Lady Love LP superb 1973 release on Buddha.

For your listening pleasure, here is our June 7th, 2016 Generoso and Lily’s Bovine Ska and Rocksteady: 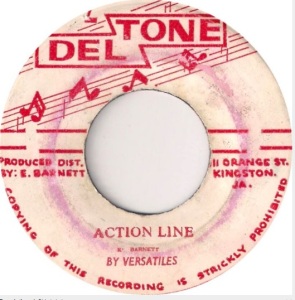 The May 31st, 2016 Bovine Ska and Rocksteady  began with a never before played on the show ska single from Justin Hinds and The Dominoes which was released on Treasure Isle in 1965, Zion Higher.  In fact the first two sets of the show were of the ska variety ending with Trial and Crosses from a very young, Lee “Scratch” Perry which was released on Coxsone’s Worldisc label in 1964.  In honor of Memorial Day, we began our weekly mento set with a 1956 MRS recording entitled, Soldier Man, from the seldom played Arthur Knibbs.  I say seldom as even though he was as prolific an artist that existed during mento, finding his recordings has been a real chore but as always we continue to search the racks.  We started the final set of the hour with the Bassies, too pretty for words rocksteady cut on Coxsone in 1967, River Jordan.  When that set ended, with the end of the first hour. we launched right into our spotlight of Enid Barrett’s DELTONE LABEL.

One of the most interesting things about Deltone is the names of two women attached to it. There is solid evidence to believe that Dorothy Barnett owned the label. Meanwhile, there are other claims that Enid Barnett owned the label, which most likely comes from the fact that Enid is credited as the producer of many records on Deltone. From what we can tell, Enid is a relative of Dorothy’s or Dorothy’s producer name, if anyone listening has any thoughts on this, we’d love to hear from you. We do know that Dorothy Barnett had some solid experience in the record industry before she ventured out to create her own label and record shop. She worked as Coxsone Dodd’s secretary, and from her observations of the ins and outs of the record business, she opened up Deltone, the shop and label. The shop, like other legendary ones, had its storefront on Orange street, and as a result, Barnett’s record label had the ability to attract much talent, including Lee Scratch Perry, who would engineer plenty of tracks for Deltone. We kicked off this spotlight in the rocksteady with Some of Them A Bawl from The Pioneers.

Deltone was somewhat of a family business. One of the musicians who saw the greatest success at Deltone was Keeling Beckford, who was Dorothy’s cousin. Also, as a result of Keeling’s presence at the label, Theo Beckford, Keeling’s uncle, would play piano on multiple Deltone tracks. The Versatiles had worked consistently with Joe Gibbs, but they decided to venture out and went over to Deltone. Teardrops Falling, Someone to Love, and Children of Today were engineered by Scratch for Deltone!

Here is the May 31st, 2016 Bovine Ska and Rocksteady for your listening pleasure….