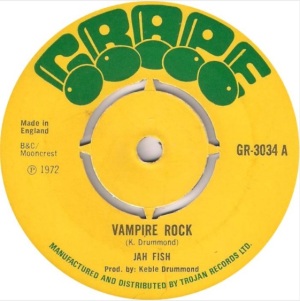 For the 20th straight year we are celebrating Halloween here on The Bovine Ska and Rocksteady the best way we know how…By playing some of the creepiest and spookiest reggae and ska ever produced in Jamaica. Mixed into our witches brew, we tossed in scary sounds and clips from B and even C level horror films of the past. Bizarre and crafty cuts from Lee Scratch Perry, King Horror, The Crystalites, I-Roy, and many others will be thrown into the cauldron.  Check it out and Happy Reggae Halloween everyone! 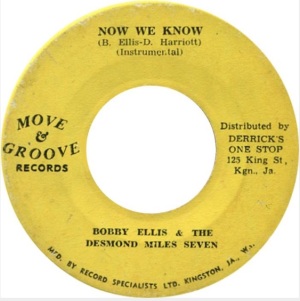 We are sad to report yet another passing of a Jamaican music great. Bobby Ellis, the foundation trumpet and flugelhorn master, passed away last Tuesday, October 18th, 2016 at the age of 84 after being hospitalized for nearly a month for pneumonia.

Born in Kingston in 1932, Bobby Ellis started his musical journey at the Alpha Boys School, like many of the foundation instrumentalists such as Johnny Dizzy Moore, Deadly Headley, and Rico Rodriguez. Ellis entered the school because his father worked with a doctor at the public hospital who had great influence at the school, and his father made a request for the doctor to grant admission for Bobby Ellis and his brother. During his seven years at the Alpha Boys School, Bobby Ellis studied multiple forms of classical music, studying trumpet specifically from Raymond Harper. He did not play in the orchestra, which had not existed at that time, but Ellis’s music education did also include Big Band style, making him perfect for the dance hall circuit in Jamaica, where bands would be required to perform multiple genres of music. Ellis left the Alpha Boys School at fifteen to work in the bus building industry in order to raise funding for his own trumpet. And after six years away from his music studies at the Alpha Boys School, he was able to buy his first trumpet and began to practice on the instrument again.

On returning to music, Ellis, in the late 50s, joined a big band, believed to be led by Tony Brown, and after Jamaican Independence in 1962, he was a member of the Mighty Vikings. In 1964, Deadly Headley recommended the Mighty Vikings record for Coxsone Dodd, and that would mark the beginning of Ellis’s recording career. In the first session recorded for Coxsone Dodd, the Mighty Vikings recorded 4 hits that included the vocals of Joe Higgs and Bob Marley & the Wailers. In this first session, “Cyrus” was a track written by Ellis and recorded on that monumental day, and as thus, it is the track that begins this memorial show on Bobby Ellis.  After the Mighty Vikings, Bobby Ellis joined the Soul Brothers on the invitation of Roland Alphonso, whom Ellis had already recorded an album with. Though Bobby Ellis generally was a member of Coxsone’s music stable, but he also went to other labels, including Treasure Isle and Matador. Ellis in turn would also join Tommy McCook’s band and Lynn Taitt and the Jets.

There are many many Bobby Ellis recordings throughout the early and mid 1960s, but due to Mixcloud restrictions, we cannot play more than 4 tracks that bear Bobby Ellis’s name as the artist on the record. Also, during rocksteady, horn arrangements were not as popular as in ska, and consequently, Ellis would tour the hotel circuit on the North Shore, joining bands led by Hooter Williams and Llans Thelwell.  During his time with Coxsone, Ellis had proven himself as a highly accomplished arranger, so much so that he had his own office in 13 Brentford Road where producers and band leaders would visit him to write horn arrangements for their tracks. And by the time reggae arrived, Ellis would be arranging again, this time with his longtime friend and collaborator, Deadly Headley.

Deadly Headley started Ellis’s recording career, and the two seemed to operate on the same wavelength, and the closeness of the two seminal musicians is further proven by the fact that the two men passed away only months apart from each other. In fact, Ellis entered the hospital only 6 days after Deadly Headley’s passing.

For his contributions to Jamaican music, Bobby Ellis received the Order of Distinction in 2014.  Rest in peace Bobby.  We extend our deepest sympathy to his family and friends.

In honor of this occasion, all of the songs were from the year of his birth, 1968. The entire second hour is comprised of covers of American pop, rock, and soul songs that were produced in Jamaica that very year. The Uniques covering The Impressions, Ken Boothe covering Simon and Garfunkel, even a Paul Anka cover done by Alton Ellis. A great mix of songs we know you will love and we will provide trivia bits about movies, music, and toys that were released that year as well.

Another great production from Lloyd A. Campbell

We are extremely sad to pass on the news of another passing of a major figure in Jamaican music. On October 4th, Lloyd A. Campbell, producer extraordinaire, passed away in Florida after a 10 year battle with cancer. There are few producers that we’ve ever featured here on the Bovine Ska and Rocksteady that are as prolific as Lloyd Campbell, and there are few who have been dedicated to creating music as consistently as Campbell, who was still DJing and producing recording artists even when he was ill.

Born in Kingston, Campbell was fascinated by soundsystems as an adolescent. As a young man, Campbell spent some time in England, but returned to Jamaica in the early 1970s and began producing for his own labels. Because of his tireless dedication and output since the early 1970s, we are dedicating two plus hours to Lloyd Campbell and his production brilliance for his various imprints.

In this memorial show, you’ll hear selections from the Rattie Soul, Spiderman, Eagle, and Joe Frasier labels, and these selections are just a sliver of Lloyd Campbell’s body of work. And, we should mention that you will not hear any productions from The Thing; that is because The Thing is owned by Lloyd F. Campbell, not Lloyd A. Campbell. Both men had comic book related labels, but the two are completely different. Lloyd F. Campbell’s comic book themed label was The Thing, and Lloyd A. Campbell’s comic book themed labels were Eagle and Spiderman. Frankly, this caused us a lot of confusion because we always believed there was only one Lloyd Campbell, the producer, but regardless of this difference, there are more than enough Lloyd A. Campbell productions to go around.

We started off this memorial show on Lloyd A. Campbell with one of his earliest productions for his Rattie Soul label. You will hear “Waterloo Rock” from Rico Rodriguez, who Campbell first met and worked with during his time in London.  One of the early artists that Campbell saw success with was Keith Poppin. The two started their collaboration when Campbell was still working at a dry cleaners in the infancy of his Spiderman label. Keith Poppin would record “Something for Breakfast” for Lloyd Campbell; the track would be released on Impact and for the Spiderman label

After an extended collaboration with Bunny Lee, Ronnie Davis recorded for Lloyd Campbell’s Spiderman label in multiple capacities. First, he recorded the single “Won’t You Come Home” for Campbell, which was a hit for the label. Then, through Campbell, Ronnie Davis met Keith Porter and became a member of The Itals, and the group also recorded multiple tracks for the Spiderman label, including “In A Dis Time,” which was one of the first successes for the group and a version of the “Won’t You Come Home” rhythm, which Campbell would use and re-invent over twenty times. You’ll now hear the original rhythm followed by a handful of versions that exist.  Jimmy London and Keith Poppin spent time in London together, and it is thus no surprise that Jimmy London recorded for Lloyd Campbell as well. As a group, Skin, Flesh, and Bones recorded often with Lloyd Campbell. Skin, Flesh, and Bones had a rotating membership, but the mainstays of the group were: Lloyd Parks on bass, Ansel Collins on keyboard, Radcliffe “Dougie” Bryan and Bertram “Ranchie” McLean on guitar, Sly Dunbar on drums, and, on occasion, Bobby Kalphat and Tarzan Nelson on additional keyboard. 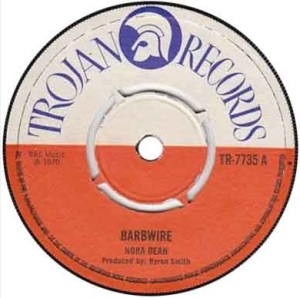 The October 4th, 2016 Bovine Ska and Rocksteady began on a sad note, as  the wonderful singer, Nora Dean,  passed away on Thursday in Connecticut at age 72.  Nora had been living in Connecticut since moving here from New York in 2010.  Nora Dean began her career during the rocksteady era with Coxsone Dodd, recording her first song, Mojo Girl, at Studio One in 1968.   She would achieve larger fame when she recorded the racy reggae cut, Barbwire, for Byron Smith at the Baron’s label in 1969. Dean cut so many tracks that we love, as not only a solo artist, but as a prominent member of The Soulettes and The Ebony Sisters.  Due to Mixcloud policies that prohibit us from playing more than four songs from one artist, our tribute to Nora was contained in eight songs that began our show this week.  We included many wonderful cuts in this memorial and we hope that you appreciate her sweet and expressive voice on these songs.  Rest in peace Nora.

We thought that for our record label spotlight, given that last week, we presented a ska, rhythm & blues, and rocksteady spotlight, we thought that this week, we must have a reggae one! In thinking of reggae, there are many producers whom we love here on the Bovine Ska and Rocksteady, and in thinking about which one to feature this week, we arrived at Carl Sir JJ Johnson, a label owner and producer who was exceptionally prolific in the early reggae era. We know a little bit about Sir JJ’s early years. Carl Johnson was the son of Bromley Johnson, the man who created the Magnet Bus Company, which was one of the first bus providers that ran to and from rural Jamaica. Carl Johnson, who would be known as Sir JJ was as business oriented his his father, but he directed his efforts on the music business. Sir JJ first started as a jukebox distributor. Eventually, like other folks involved in the jukebox industry, he decided to open up a record shop, picking 133 Orange Street for his center of business, a prime location because Beverly’s was right next door For his signature label that bore his nickname, Sir JJ recruited outstanding talent.

The house backing band for the Sir JJ label was Bobby Aitken and his Carib-beats. For the label, the group was called the JJ All Stars, and the members were:  Bobby Aitken, the leader of the group,  on guitar,  Winston Richards AKA Grennan on drums, “Iron Sprat” on bongos, Vincent White on bass, Alphonso Henry on alto sax, Val Bennett on tenor sax, Dave Parks on trombone, Mark Lewis on trumpet, and Bobby Kalphat on keyboards .  Of course, given that we are talking the JJ Label, we had to play “The Selah,” which is one of the most successful Sir JJ tracks, with many versions of the track made in the same year that the original was released.