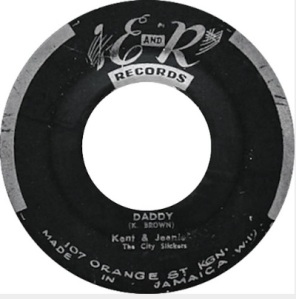 The November 8, 2016 Generoso and Lily’s Bovine Ska and Rocksteady featured a spotlight midway through the show of Roy Robinson’s E&R Label.

The owner and primary producer of the E&R label was Roy Robinson. Roy Robinson and Winston Delano Stewart, who would later become a member of The Gaylads, recorded a few singles for Coxsone Dodd as Winston & Robbie in 1961.  The duo recorded: “Little Honey” & “Miss Mabel” for Dodd, and shortly thereafter, Robinson founded the E&R label. There is an open question as to the identity of Roy Robinson. On a few resources, Roy Robinson has been listed as one half of Simms & Robinson, the duo that saw success during the rhythm and blues period.  Simms & Robinson, the duo that also featured Noel “Zoot” or “Scully” Simms would later be known as Bunny and Skully. This Robinson has, as a result, also been listed regularly been as Arthur “Bunny” Robinson. Thus, it is unclear if Roy Robinson and Arthur “Bunny” Robinson are the same person. There is no definitive answer, but we do know that Roy Robinson also produced two singles with Eric Monty Morris for a short lived label named CDC.  If any listeners out there have any clues as to who Roy Robinson is, we’d love to hear from you. We’re going to start off the E&R spotlight with three tracks for The Continentals, a group who recorded exclusively for the label, starting with “School Girls.”

The backing band for the E&R label was primarily Hersang & the City Slickers, who were one of the most popular R&B and ska session artists. Herman Sang was originally a member of the Frats Quintet and the Jiving Juniors before he ventured over to Coxsone Dodd.  With Dodd, Sang formed Hersang & the City Slickers in 1958.  The members were: Herman Sang – bandleader & pianist, Arkland Parks – drums, Cluett Johnson – double bass, Don Drummond – trombone, Ernest Ranglin – guitar, Lester Sterling – alto saxophone, Roland Alphonso – tenor saxophone.