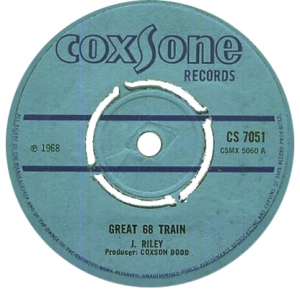 Besides being the year of Generoso’s birth, 1968 was one hell of a year for Jamaican music. That year saw the end of the rocksteady era and the rise of a new rhythm in Jamaica…reggae. As the tradition goes during the last eighteen years of the Bovine Ska and Rocksteady, Generoso’s birthday radio program is punctuated by having good friends stop by the station, the making of a cake with one slightly disturbing word as it’s message for the year, and the playing of tracks from 1968, both rocksteady and reggae of course.

The show begins this year with eight tracks that actually feature the year “1968” in their title, many of which were Jamaican song competition entries for that year like “Intensified ’68” by the late, great Desmond Dekker which begins this year’s show followed by the version from Lynn Taitt and The Jets going out as always to Magnus. The Three Tops punchy rhythm on “Great ’68 Train” produced by Coxsone followed and a smart reggae from producer/vocalist Clancy Eccles “Festival ‘68” ended that opening set. Of the 1968 titled tracks we played, we must say that “Come Down 68” featuring the smooth voice of Trinidadian, Kentrick Patrick, a.k.a. Lord Creator is my favorite. We so wished that Creator had cut more tracks during early reggae as his voice was made for the rhythm and the track does remind me of his masterpiece, “Such Is Life,” which he cut for Randy’s.

This year, we called out to the listeners for their favorite 1968 tracks and our good friend Melody Wining suggested the track that many people regard as the very first reggae release… “Do The Reggay,” a Beverley’s produced cut that does possess that irresistible early reggae rhythm that we love here on the show, and a lead vocal from Toots which is as always as raw and brilliant as you could ever hope for in a cut.

Finally, we want to wish love to you our Brian, Nancy, and Brett who came to the station that night to help us celebrate and to all of our listeners and friends who called or emailed good wishes throughout the day and the show.

Listen to the show via the WMBR archives here: LISTEN HERE