For this past week’s edition of the Bovine Ska and Rocksteady, we kicked off the show with a newly unearthed Justin Hinds and the Dominoes ska track entitled, “Verona.” Then, in order to make sure that all genres were covered, the program progressed from ska to mento to the rocksteady, with recordings from Winston and Bibby, Clyde Hoyte, Tomorrow’s Children, and The Lyrics before all of the reggae featured in our hour long spotlight on the early recordings of Gregory Isaacs. 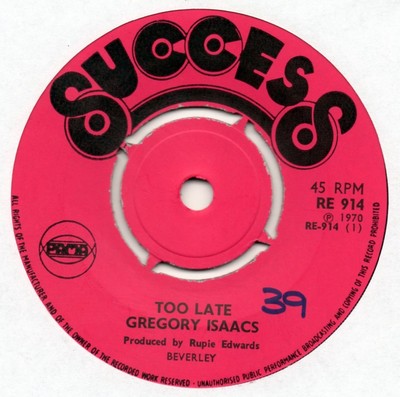 Too Late – One of Gregory Isaacs’ first solo recordings

Gregory Isaacs is a singer who gained great popularity during his early career, so much so that he was even signed to a record contract with Virgin Records in his later career. Admittedly, the Bovine Ska and Rocksteady has not featured Isaacs as a spotlight because his most popular tracks are ones that stylistically do not fit in the time frame that we like to focus this show on. However, we were able to find some of Isaacs’s first recordings, and they were perfect for this artist spotlight.

Born in Fletcher’s Land, Kingston, Gregory Isaacs was raised by his mother near Denham Town. Attracted to music through his own mother’s singing as she ironed, as a teenager, Isaacs began competing in talent shows and showcasing his voice, occasionally even performing duets with his brother Sylvester. A duet with another artist, Winston Sinclair, from his neighborhood would be Isaacs’s first recording in the Jamaican music industry. This duet track, “Another Heartache,” did not gain a ton of success, and Isaacs went on to join The Concords with two men known as Penroe and Bramwell. The group was short lived, but they produced some really beautiful recordings.

After beginning his music career working with other singers, Isaacs eventually decided to become a solo artist, continuing to work with Rupie Edwards, who worked with The Concords and would be a continuing collaborator throughout Isaacs’s career.

In 1973, Isaacs scored his first hit with the Phil Pratt produced track, “All I Have is Love.” After that success, he would jump to other producers including Leonard Chin, Alvin Ranglin, and  Sydney Crooks, with Isaacs scoring a number one hit on the Jamaican charts with “Love is Overdue,” a single recorded for Alvin Ranglin’s GG label. And with the success seen in 1973 and 1974, Isaacs’s career would propel in the coming years.

In 1973, Gregory Isaacs teamed up with Errol Dunkley to create the African Museum record label and shop. Here, Isaacs would write, record, and produce his own tracks, with the earliest African Museum releases exploring more of a roots reggae sound.

After a long battle with lung cancer, Isaacs died on 25 October 2010 at his home in south London. As a testament to his fame and popularity, a memorial service was held on November at Kingston’s National Indoor Sports Centre, including a musical tribute from artists including Lloyd Parks and We the People Band, Ken Boothe, Freddie McGregor, Shaggy, Judy Mowatt, The Tamlins, and Bongo Herman, before his remains were interred at the Dovecot Cemetery.

This spotlight on Gregory Isaacs features his earliest recordings and follows his early progress and growth as a singer, songwriter, and producer, giving honor to his great talent as a young musician.

Listen to the full program HERE.

This edition of the Bovine Ska and Rocksteady is available until  1/20/2014. Enjoy!