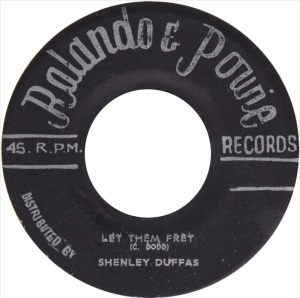 After two weeks of theme shows, we came back this week with our time-tested recipe for The Bovine Ska that included a spotlight of an early Coxsone imprint, Rolando And Powie which started midway through the show.

We dedicated this show to vocalist Jimmy Riley of The Sensations and The Uniques who recently announced on his official page on Facebook that he was in poor health.  We send him and thoughts and prayers for a full recovery. To honor Jimmy Riley we started our show with his wonderful rocksteady from 1968 on Coxsone  You Should Have Known and then followed with a version from The Gladiators, Tribulation.   The second set of rocksteady began with a rarely heard Melodians cut on Treasure Isle, a beautiful harmony on Somewhere from 1967.  After a nifty mento set which featured The Wrigglers 1960 tune, Little Boy which was released in 1960 Kalypso LP The Wrigglers Sing Calypso At The Arawak we threw out a scorching ska set that began with one that we have never played on the Bovine Ska, Love Is All I Had by The Federal Singers on Federal Records.  Right after the ska set, we went right into our spotlight on the Rolando And Powie Label.

As a young man, Coxone Dodd moved to Florida to work as a crop picker, and during this time, he immersed himself in American Rhythm & Blues, which he had known via Tom the Great Sebastian’s soundsystem, but being in America, he was able to hear the latest hits and see live performances, giving him a new insight into the music. Consequently, when he moved back to Jamaica, Coxone Dodd opened up his Downbeat soundsystem, playing records he would regularly bring back from trips to America. As rock ‘n roll overshadowed rhythm and blues America, Coxsone decided to to record Jamaican musicians and to play fewer American records at his soundsystem. Initially, these recordings were only created as Dub plates, but upon realizing that commercial potential of the music played at the Downbeat, Coxsone Dodd began opening his own record label imprints, allowing the one off songs recorded on Dub plates to be enjoyed by anyone with a record player or via DJs on the radio.

During the sessions that produced singles for Coxsone Dodd’s labels, Dodd relied heavily on the talents of Rolando Alphonso, who was well known across the music industry as an excellent saxophonist and as a result was in high demand from multiple producers. Powie, a Chinese Jamaican friend of Roland’s, opened up the Rolando and Powie label, with Powie paying for the recording sessions that Roland performed on. In less than a year, Roland decided to record more for Coxsone, so Dodd bought out the Rolando and Powie label and used it to release his own productions.

We kicked off this spotlight on the Rolando and Powie label with Powie’s Hop, a track referring to Powie and one backed by the Alley Cats, a group that Rolando helped form and would be the key group to initially record for the label before Coxsone took it over.

You can listen to our full Gladdy Anderson retrospective from January 5th, 2016 HERE. Subscribe to our show on Mixcloud; it’s FREE, and you’ll get an email every Tuesday when we post a new show.

Happy December!!! Please help us and spread the word and repost if you liked the show! Repost anywhere you see fit.

Join the group for the Bovine Ska and Rocksteady on Facebook.

See you here next week!