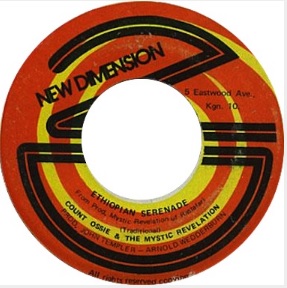 Being that our spotlight for the July 12th, Bovine Ska and Rocksteady was reggae heavy, with the New Dimension label we thought to start out show with two sets of ska and why not one from the king of the ska trombone, Don Drummond.  Don D recording this ska for Coxsone in 1964, the sensational, Royal Flush.  Our mento set began with a  cheeky 1956 Kalypso 7″ from Count Zebra And The Seasiders, Cat-O-Nine.  We followed the mento set with a long set of early reggae to get you ready for the New Dimension spotlight.  In that long set of reggae we included a back to back version with the late great Delroy Wilson and his cuts for Attack in 1972, Mood For Love.  At the end of the reggae set we went right into our spotlight of the New Dimension label…

Here on the Bovine Ska, we look for any excuse to play tracks from Count Ossie and Cedric ‘Im’ Brooks, and that was what led us to this week’s label spotlight on the New Dimension label.

Brooks’s career got its humble start at the Alpha Boys School, and upon graduation, he toured with the Jamaica Military Band. Originally a clarinet player, he switched to saxophone when he played with the Vagabonds and would stay with sax in the years to come as a member of Sonny Bradshaw’s stage band and the Granville Williams Orchestra. Brooks’ style evolved when he moved to Philadelphia in the late 60s, and as a student at the Combs College of Music, he got further exposure to the experimental jazz work of Sun Ra and Pharoah Sanders, and they would heavily influence his arrangements and his playing style when he returned to Jamaica.

On his return, Brooks first created the Mystics to perform the works combining the jazz he learned in Philadelphia with reggae, which was surging on the island.  The Mystics met Count Ossie and his percussion group, forming Count Ossie & The Mystic Revelation of Rastafari.  Arthur Wedderburn, a jazz collector, opened up the New Dimension studio and label to record the seminal Count Ossie & The Mystic Revelation of Rastafari record Grounation Wedderburn produced and engineered with that record, and it is one of the few productions he did for the label.  Many of the recordings on New Dimension had other producers, giving us the sense that outside of the Count Ossie record, New Dimension was a studio and label that artists and producers could bring their songs to for recording and pressing.

Regardless of the producer, what is consistent throughout these New Dimension recordings is a richness in the arrangements and the vocals, and that is one of the many reasons why we are excited to present this spotlight tonight
And, of course, we began with the Count Ossie and Cedric Im Brooks collaboration that is The Mystic Revelation of Rastafari with their track, Lumba.

We hope you enjoy the July 12th, 2016 Bovine Ska and Rocksteady: