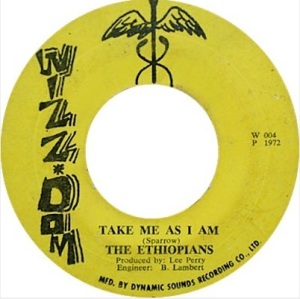 We spent the bread that we would’ve used to buy food to get records for the August 9th, 2016 Generoso and Lily’s Bovine Ska and Rocksteady Radio Show, but please don’t let the guilt that you should feel influence you in any way to listen to the this week’s show! Midway through the show, we have a spotlight on Lee “Scratch” Perry’s Wizz-dom label (1972-1973) which is so good that we have almost forgotten how satisfying a square meal feels like when you get to eat one. Amazing cuts from The Heptones, Melodians, Junior Byles and of course, The Upsetters! As the Wizz-dom label is so thick with the reggae, we decided to start off this show the ska, beginning with Joe White’s festive 1965 cut for Duke Reid’s Treasure Isle label, Irene.    Our mento set featured the title cut from Percy Dixon’s Scandal In Montego Bay LP which was released on Sue in 1964.  After that set, we launched into a long set of rocksteady with a real rarity being The Minstrels 1968 tune for Coxsone on Studio One, Giving Up On Love.  We then went right into the Wizz-dom label spotlight.

We are thrilled to present a spotlight on a label from one of the most inventive producers, engineers, and all-around performers tonight….Lee Scratch Perry.  Over the course of his career, Perry founded many labels. Upsetters, Goodies, and Justice League are just a few, but this week we decided to focus in on the Wizz-dom label. Believed to be born in Kendal as Rainford Hugh Perry, Scratch got his recording first name from his mom’s nickname for him, Leeburn.  Perry’s path to music began in Negril. On moving to Negril from Clarendon, where Lee had built up a reputation as a great dancer, Lee worked on construction as a part of Jamaica’s development of the region as a tourist site.  During his days spent moving rocks on construction sites, the sounds of the shifting and the clashing of stones spoke to Lee and pointed him toward Kingston to make music. In the Kingston music scene, Lee wore many hats for Coxsone Dodd and Studio One writing and arranging songs and appearing in front of the microphone as a recording artist. After spending a lot of time with Coxsone, Perry moved over to Joe Gibbs before eventually venturing out and creating his iconic Upsetter label, giving him his own avenue to flourish as a producer and arranger.

At Wizz-dom, we see Scratch as the mastermind for all goings-on for the music being recorded and the distribution of his recordings.   In the early days of Wizz-dom, Pat Francis approached Scratch with “King of Kings,” and after recording it, Scratch felt that Francis would be a good salesman for Wizz-dom and the other labels he had, so Francis became a salesman for Scratch, a position he held for three years. We kicked off the spotlight with this track that started the Pat Francis and Scratch business relationship, King of Kings, a majestic track that set the tone for this Wizz-dom spotlight.

The Upsetters, the house band for Lee Scratch Perry productions, had three distinct line ups. By 1972, when the Wizz-dom label was launched, the Upsetters had a fluctuating lineup, but Perry would always insist on using the best musicians he could find for each recording.   By 1974, the band membership became more stable with Boris Gardiner on bass, Earl “Chinna” Smith on guitar,  Winston Wright & Keith Sterling on keyboards, and  Sly Dunbar or Benbow Creary on drums.