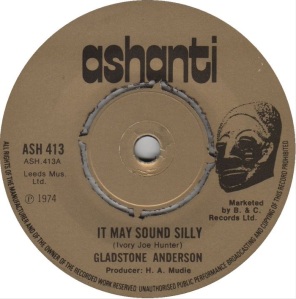 With heavy hearts we are sad to report that pianist and vocalist Gladstone “Gladdy” Anderson has passed away.

As a studio musician and an arranger, Gladdy worked for many labels and many house bands, making this memorial show probably one of the most difficult to put together, but one that we are proud to present to honor the fantastic work of Gladdy Anderson. Born in Jones Town in 1934, Gladstone “Gladdy” Anderson had musical influences quite early in his life. Though his father was a railway engineer, his uncle was Aubrey Adams, pianist for groups such as Clue J and the Blues Blasters and band leader for the Courtleigh Manor Hotel house band. Adams taught Gladdy how to play piano as a boy. As Gladdy continued to practice as a teenager, Adams took a trip to Panama, and when he returned, he introduced Gladdy to Duke Reid, where Gladdy first focused on playing rhythm parts on piano, occasionally getting a chance to play with his uncle, who performed the primary piano, organ, and keyboard parts. At Duke Reid’s Gladdy would also rise in the ranks, becoming one of the first people hopeful artists would audition for. Given Gladdy’s early history with Duke Reid, wekickoff off this memorial spotlight on Gladdy Anderson with three tracks from the Duke Reid All Stars; tracks where Gladdy would play with his uncle Aubrey Adams.

The sheer number of tracks that Gladdy played on is staggering as was the many different musicians in bands that he recorded with throughout his legendary career.

Gladdy was uniquely prolific, and given his reputation and constant work beginning in the 50s, he was present at some key points in the evolution of Jamaican music. When in the studio with Lynn Taitt, who Gladdy helped as a translator and band leader because many musicians had difficulty understanding Lynn because of his Trinidadian accent, Gladdy was in the band that would record the first rocksteady track, Hopeton Lewis’ “Take It Easy.” In fact, it is believed that Gladdy may have been the person to name the rocksteady genre, given that he described the recording of “Take It Easy” as “rock steady.”

With the tune, “Hold Them” -Roy Shirley had this melody and brought it over to Gladdy and Joe Gibbs. During the rehearsal, he brought Slim Smith and Ken Boothe to perform backing vocals, but after rehearsing the song, Gladdy suggested that Roy perform the song as a soloist because he better understood the rocksteady rhythm at the time.

A gifted vocalist, the second hour of  our tribute began with tunes from The Seraphines, which was the name Stranger Cole and Gladdy came up with when they sang fro Sonia Pottinger and her Gayfeet label.   The duo would also record hits under their own names like “Just Like A River” and “Seeing Is Knowing” but due to Mixcloud’s policy that limits the amount of tracks that one program can play from one artist, we limited his vocal spotlight to the Seraphines cuts.  We welcome you to find these tracks yourself as they are quite impressive.

During this period that saw Gladdy arise as a vocalist, he of course continued to play on a huge amount of tunes during the rocksteady and reggae eras.

You can listen to our full Gladdy Anderson retrospective from December 8, 2015 HERE. Subscribe to our show on Mixcloud; it’s FREE, and you’ll get an email every Tuesday when we post a new show.

Happy December!!! Please help us and spread the word and repost if you liked the show! Repost anywhere you see fit.

Join the group for the Bovine Ska and Rocksteady on Facebook.